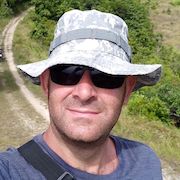 Hello! My name is Arnan de Gans. I am an entrepreneur. I am the AdRotate guy.
I mostly work as a plugin developer making WordPress plugins.

Hello! Thanks for stopping by. My name is Arnan de Gans. I am originally from the Netherlands. I'm in my 30s. This is my profile.

I left school when I was 16 and worked as an electrician and security systems technician for a few years. Then went back to school in 2005, got bored and left early again to work Support for a large Apple Authorized Service Provider in 2007. That didn't quite work out so I found something better at an Apple repair shop in Amsterdam in 2009. I worked there for a few years, repairing everything from iPods to Mac Pros. Around 2011 I moved on to a large harddisk manufacturer to work in their data recovery lab.

All the while I had this silly hobby. Web-development. It was fun.

Over the years I'd become increasingly dissatisfied with the European Union and their nonsense and finally figured out I wasn't going to be happy if I stayed for much longer. Worn out by rising costs, poor weather, peoples ignorance, illegal immigrants and many more frustrations I felt that I had to make some drastic changes to my life. After nearly bankrupting myself with a brick and mortar business I'd started the year before, I suddenly had enough. Over the next year I would spend preparing for something more enjoyable. I sold all my stuff and in late 2015 I left my plain and unfulfilling life in the Netherlands behind and moved to the Philippines. Though currently I'm in Mexico.

When leaving the Netherlands I sold pretty much all of my belongings and I've turned into a bit of a minimalist. I don’t have a lot of possessions anymore. Everything I own pretty much fits in two bags. I find that this works very well for me. The few things I have are much more valuable to me and are more carefully weighed if I should have them at all. On top of that, my life got more minimalistic as well. Along the way I have found new things to do and learned to leave behind a lot of things and habits. As a result, my life tends to be a lot simpler, but at the same time my nomadic lifestyle brought a whole new set of challenges.

I’m a 30-something guy who has ditched mainstream life. I'm a nerd, a geek and a jack-of-all-trades, nomad and entrepreneur of sorts. Creative thinker and often overanalyzing everything. Much to my own chagrin.

I’ve moved away from the Netherlands and am currently searching for my paradise. My goal is to create a more relaxed and carefree lifestyle. I've discovered that one of the biggest adventures is making trips on a motorcycle.

Everything I own fits in 2 bags. It's mostly clothes, my laptop and a few gadgets. I have a basic set of tools for maintenance. A med-kit and a bunch of accessories for the few gadgets I have. Flip flops, shoes and some other small things.

I travel around and try to find new nice places on a regular basis. I live a nomadic lifestyle. But I'm not a typical Digital Nomad. I don't socialize much nor do I care to have loads of people around me. Traveling at my own pace by my own rules is great!

Cold weather depresses me. I like video games. Lego is cool. I prefer flip-flops over shoes. I don't like the modern internet. Chocolate is awesome. ISTJ-T. I'm a shy romantic. A sloppy perfectionist if that’s a thing. Banana shakes are yummy.

AdRotate is my solution to manage any kind of advert on WordPress. I maintain AdRotate and AdRotate Pro, which is a paid version with more features. If you have WordPress you should check out it!

Moving to Southeast Asia and back

In late 2015 having prepared everything there is to prepare for I moved to the Philippines. I flew to Manila on October 1st, arriving the next morning. For the first few months I stayed in a place called Puerto Galera to get my bearings and get over the first culture shock and then moved south to Iloilo City, Bacolod to sort of end up in Dumaguete City on Negros Island. Where I have lived for almost 2 years in total. Meanwhile I have explored a lot of the country and have been on most major islands all over the country.

In late 2018 I visited Kuala Lumpur in Malaysia. There I discovered, much to my frustration, what a crap country Philippines really is. Seeing a more developed country you suddenly realize how low I sunk in my living standard and the daily frustrations I had to deal with. Malaysia was a huge eye-opener in that regard. After returning to the Philippines it quickly became apparent that something had to change yet again. And after some contemplating I left the Philippines for Southern Europe with the idea to roam around southern Europe for a bit and finally to secure a visa for Mexico.

The plan was to stay in Spain for a few months to recharge and plan for the next move, but the shock of Europe was so great I skipped Spain completely. As planned I spent a few weeks in Italy then ended up in Milan where I got on a train to the Netherlands for the Mexican Visa and in early 2019 I moved to Mexico. From the Mexican embassy I did manage to get a permit to apply for a Temporary Resident visa. While waiting for the residency status the world kind of ended...

In these times of 'social disfunction' and 'irrational flu' everything goes slow. Including the Mexican government. But I finally have my residency status. In January of 2021 I finally was able to buy motorcycle and explore more of the country. Over the next few years I hope to do just that. Finally get to know the country and see more of it than just Quintana Roo and its tourist traps. Hopefully I'll find my footing and maybe even stay here permanently. I kinda like Mexico so far.

But if not, I'll probably head south towards Panama or something. Or go see the Grand Canyon and the Statue of Liberty and more of such attractions.

Will code for Tacos

Since 2012 I have been a fulltime freelance web developer. During the first few months I spent most of my time on making a more professional website and turning some plugins I maintain into paid products. Usually I'm working on something WordPress or WooCommerce related.

Working online and occasionally traveling, I guess that makes me something of a Digital Nomad. But I'm not all that Digital. Just being a Nomad is enough for me. I don't follow the hype and never visited a co-working space like those hipster types you see on YouTube. I rather focus on doing my own thing.
I maintain a growing library of plugins for WordPress and WooCommerce such as AdRotate and AdRotate Pro. And I sell a bunch of smaller plugins for WooCommerce. Currently I am available as a freelance developer. I know PHP/MySQL/HTML/CSS and a bit of JavaScript. Among other things.

I've been making WordPress plugins since about 2005, back when WordPress 1.5.2 was hip and cool. Before that I attempted to make my own Content Management System. And did odd jobs for local businesses. At the time I wasn't sure where I wanted to be with web-development... In 2012 I turned my hobby into a fulltime job. And I have been lucky with it so far.

I love exploring on a motorcycle. All my possessions on the back, and just go. Following the road, or path or trail. And just ride to the next interesting looking place. Where I'll then probably stay for a while. I like to explore everything I want to see and discover. There is no plan other than a general direction and some cities or areas I want to check out. Most of the time planning doesn't go much further than about 1 to 2 months ahead while traveling.

In January 2021 I bought a brand new BMW F850GS Adventure motorcycle. And once the 'irrational flu' finally goes away I'll head out into Mexico.

I'm searching for my paradise. It turns out that paradise is a hard thing to find. I've been all over Europe. More recently I've been to South East Asia. Namely the Philippines and Malaysia. Both are good fun for a while. But both countries are not what I'm looking for.
On my travels I am joined by various people from time to time including some girlfriends and my mother, Jeanette.

If you have questions or want to discuss something related to where I've been or what I do, feel free to send a message using the icons on the lower left.

In October of 2015 I left my home in Alkmaar, the Netherlands, for the last time and flew to the Philippines that evening. I spent one night in Manila and moved on to Puerto Galera on Mindoro Island the next day.

While being in the Philippines I've been to many places. The Philippines is a great country to explore and to see all the sights. The landscape can be challenging and impressive at times. Roads are often a hassle but that's part of the adventure.

Having spent a while in the Philippines, immigration law dictates me and JC leave the country. We decided to take a little vacation to Kuala Lumpur in Malaysia to do some shopping and be allowed to 'reset' our visa. Overall, Kuala Lumpur seems to be a nice place to visit.

After our trip to Malaysia I continued on in the Philippines. Unfortunately having seen Malaysia also made me realize what a crap country the Philippines really is. I'd come to realize I don't fit in with the people, and eagerly left the country.

I've explored Italy for a little while. I've visited Rome, Florence, Pisa, Venice and Milan. From there I took a train through the Alps to the Netherlands to prepare for Mexico. This took about 2-3 weeks. And just before my hotel stay was over I got my Visa for Mexico.

I've managed to get a Temporary Resident visa for Mexico, and moved there in February for an undetermined period of time. Once I find my way, I hope to explore all of the country and possibly visit Guatemala and Belize among other places using Mexico as my base.

Via Airplane I've travelled more than 97000km. Riding my motorbike I've driven more than 35000km in the last few years. And I've moved around more than 10000km by train, bus and boat.

Over the last few years I've stayed in more than 60 different hotels, lodges or inns. I've lived in 21 different houses and apartments and slept uncomfortable on more than one occasion.

So far I've been to 19 countries in my life. With still more to go. I speak Dutch and English, a few words German, French and Spanish. Currently I'm learning Spanish. And after a year in the Philippines I completely gave up on understanding Bisaya and Tagalog.

I’ve been in a hotel fire where the building caught on fire from the next-door slums. An earthquake hit my hotel once and I've been in 3 major tropical storms and one smaller one. Sat without power for 3 weeks after a hurricane and I've driven through floods and and nearly got hit by a landslide.

On my motorcycle I've been the victim of 3 hit-and-runs. I also ran over a dog at high speed. A bird hit me in the helmet once. I've fallen of several ledges/cliffs with my motorcycle. Parts of my luggage got lost and I've had food poisoning quite a few times.

I've hiked up 3 mountains and explored more than 10 waterfalls and tons of scenic views. I've been on heaps of nice beaches and swam in 3 rivers. And I've driven off-road several thousand kilometers for it.